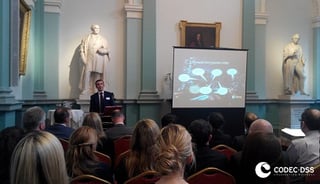 Last week Codec-dss launched its 7th annual EPM & BI Event, where attendees were given an exclusive look into the latest innovations and technologies available to them to tackle their most demanding, data-driven issues.Taking place for the first time in the Royal College of Physicians of Ireland, No.6 Kildare Street, the much anticipated event began at 1:00pm when the guests were treated to lunch alongside demonstrations of Oracle’s latest Hyperion planning software as well as OBIEE.

With full stomachs, the guests then heard from Aine Nolan of Irish Distillers to hear how the company implemented Hyperion Planning with Codec-dss in order to streamline their data maintenance and replace their current excel based planning system with the automated solution.

Following on from Aine were Codec-dss’ very own Michele Mele and Caoimhe Darcy, whom gave an in-depth demonstration into improving business predictability through Budgeting and planning apps and empowering business with OBIEE.

Permanent TSB’s Senior Manager of Capital Planning Killian Byrne then took to the stage to explain how the leading financial services provider implemented both EPM & BI with Codec-dss, resulting in the delivery of “live” information rather than historical month-end as well as a Plannign Cube that simplified the budgeting process being among the benefits of the implementation.

Following Michelle Clarke of Codec-dss discussion on how Financial Close Management enables the close cycle, International Economics Research Associate Ahmad Shadid discussed the innovations brought around with Big Data in his presentation entitled “Big Data: Whatever happened to Little Data?”, which endeavoured our guests to stop worrying about Big Data and starting loving it instead.

To end the packed day, Damian Griffin of Defence Forces educated the audience on the importance of data security and its relevant and impact in today’s world, before our very own Rob O’Sullivan ended the afternoon by discussing the benefits and advantages proactive management of EPM and BI provides a business.

Codec-dss would like to extend a thank you to all who attended this year’s EPM & BI Showcase 2015, and especially to our guest speakers for their contribution to making the Showcase a success.